Biggest Oil and Gas Boom Ever


The U.S. Is on the Threshold of the Biggest Oil and Gas Boom Ever

The U.S. is set to enjoy the biggest increase in oil and gas production the world has ever seen over the next few years, according to a new report out Tuesday.
The report from the International Energy Agency (IEA), a Paris-based think tank, is a thumping endorsement for the shale sector’s resilience in the face of a two-year attempt by Saudi Arabia and others to squeeze it. That’s already visible in U.S. government forecasts, which say U.S. crude oil production will rise from an average of 9.2 million barrels a day this year to 9.9 million barrels a day in 2018, a new all-time high beating a record set in 1970.
The IEA said the U.S. will account for 80% of the increase in global oil supply between now and 2025, as shale producers find ever more ways to pump oil profitably even at lower prices. By the late 2020s, the U.S. will become a net exporter of oil for the first time since the 1950s.
For more information go to
http://fortune.com/2017/11/14/us-oil-and-gas-boom/

Popular posts from this blog

Baker Hughes: US rig count jumps 8 units to hit 1,021 The US drilling rig coun t gained 8 units to reach 1,021 during the week ended Apr. 27, data from  Baker Hughes  indicate. The report shows an overall increase of 156 units from year-ago levels. Offshore units were unchanged this week at 18 rigs in the Gulf of Mexico. A total of 998 rigs were drilling on land, up 7 units from last week ( OGJ Online, Apr. 20, 2018 ). The number of rigs drilling in inland waters was up 1 unit to 5 rigs working. Rigs targeting oil were up 5 units to 825, and up 128 from the 697 rigs drilling for oil this week a year ago. Gas-targeted rigs climbed 3 units to 195. This time a year ago, 171 units were drilling for gas. Oklahoma saw the largest increase with a 6-unit jump to 133 rigs running. Texas, at 513 rigs working, was up 4 units. North Dakota reached 55 rigs working, up 3 from a week ago. Louisiana, at 60, and Ohio, at 24, were up 2 rigs each from a week ago. California added a single
Read more 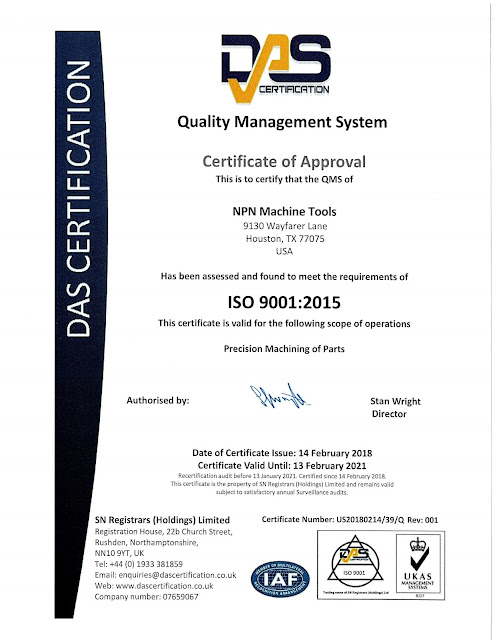 NPN Machine Tools is proud to announce that we had become ISO 9001:2015 Certified Company.
Read more 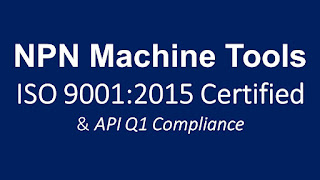 NPN MACHINE TOOLS Since 1997,  NPN Machine Tools  has been doing business. Our 37,250 sq. ft . state of the art facility is located in Houston, TX. Our clients include both US and International companies. While the majority of our clients are in the Oil & Gas market segment, we have experience with a wide range of industries. Our primary goal is to build long term relationships with our clients by providing the best  quality , service and pricing available in the market. NPN Machine Tools  is very competitive in rapid prototyping, short-runs and high-volume machining projects. We can machine on carbon steel, alloy steel, aluminum, brass, bronze, stainless steel, chrome, cast iron and any other metal, including plastic or rubber material. At  NPN Machine Tools , we pride ourselves on providing the best  quality , service and pricing available. From prototypes to production runs, we can do it all! With our more than twenty years of experience in supplying turnkey CNC c
Read more